A branch of the ancient Levi family of Jewish origin, had been working since the seventeenth century, in the almost alchemical field of distillation, in the Alpine valleys of San Giacomo or Vallespluga, locally called “Val di Giust”, in the municipalities of Fraciscio di Campodolcino.

For over three centuries, distillers called “grapat” emigrated temporarily from these valleys during grape harvest and wine-making, to the wine regions of Piedmont where, using mobile stills, they proceeded to the distillation of pomace for the production of Grappa.

Many of these distillers, with time, moved permanently to the workplaces and established real, permanent distilleries.

Between Lombardy, Piedmont, Val d’Aosta, Veneto and Emilia, about fifty distilleries were founded by people from the Val di Giüst. 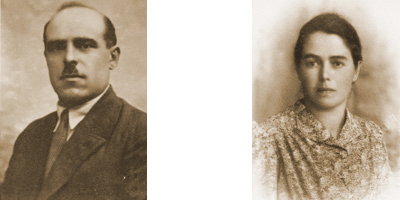 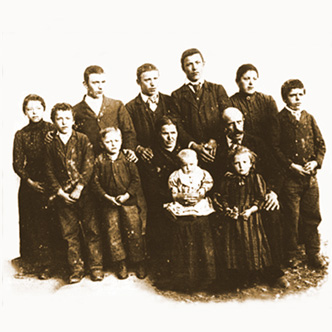 Angelo Levi’s family (Romano Levi’s grandfather)
Six of the nine children were distillers:
Guglielmo in Aosta,
Angelo and Eugenio in Cortemilia (CN),
Serafino, Romano e Lidia’s father in Neive (CN),
Egidio in Settimo Vittone (TO),
Rosa (married a distiller) in San Colombano Al Lambro (MI)
In Fraciscio di Campodolcino, there is still the ancestral home of Levi, called “Casa degli Angeli” (House of Angels) because all the heads of the families that lived there were called Angelo, like the grandfather of Romano and Lidia. Perhaps it is not entirely accidental that, when Veronelli found out about Romano, he called him the “Grappaiol’angelico (The angelic Grappa distiller).”

Serafino Levi married Teresina Balbo and two children were born from the marriage, Lidia and Romano. In 1925, he chose to settle in Neive, land of great wines and where pomace of the highest quality was available, here he founded his direct fire distillery.

Serafino died young in 1933, leaving two small children and his wife, who continued to run the distillery. But she too was marked by a tragic fate, she died during an air raid in 1945. Romano Levi was then 17 years old and a student at Alba. He decided to quit his studies and, with the help of his sister Lidia, continued distillation. 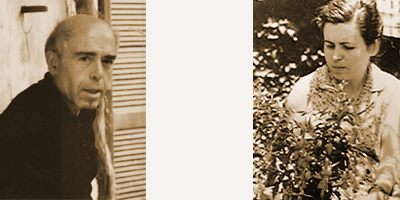 “I make grappa: the blood of fire, the pangs of life, poetry are yours.”

The distillery was built by Serafino Levi and was fitted, then as now, with a direct-fire still, as we are told during one of the rare interviews with the son Romano in 1991:

“… in those days there were so many of them … usually distilleries operated with direct-fire stills. A Malba device, because I always heard the name Malba being mentioned, then I saw that at the Bocchino distillery, which has a room with stills in sight, there was Malba Giovanni Ricostruzioni Meccaniche Asti or Malba Fratelli (Malba Brothers) or something like that, and the one we have should be a Malba device … for me, who I think can now say to know about it quite well, if not extremely well, since I’ve been distilling for 46 years, it is a very good device. It is a little gem, a toy, that if one gives it what it wants, what is necessary, if you do not push it, if it suits it, it does wonders…
… I think that this Giovanni Malba was a distiller because they made this equipment very well; as well as designing it, if they designed it, they have made it very well”.

The Levi house-distillery is now a living, Grappa production museum, a real time capsule, where the Genius Loci of Romano Levi, hovers everywhere in art, in the method and time of work, in the simple and basic objects, scents and serenity. The distillery is always open to everyone, it’s a bit more difficult is to find some bottles ready for sale, as the very low production capacity cannot meet the demand that comes from all over the world, but connoisseurs are aware of this, they enjoy the serenity of the place, don’t get angry and wait or try again patiently.

“Grappa succeed superb and he makes the ‘reverence’ labels who writes with wisdom painstaking hand, and that dedication. The names stop in time his great love for Women decent and unseemly, wild, ascending and descending, climbing over hills, you leave and do not touch, golden-haired silver”

When it comes to the types of Grappa, it is often wrong to think only about Romano. They should be called GRAPPE DI LIDIA AND ROMANO LEVI, both because the distillery was undivided heritage of the brothers, and because Lidia, isolating herself on the first floor of the house in which she led an almost monastic life, selected and achieved the very rare bottles of herb Grappa. Lidia was the older sister, an exceptional woman, protective, strict and cautious; this is how Romano describes her in an interview:

“… For me it has been a great help (her presence) because I certainly wouldn’t be here at this point … yes, she is also strict with me, so she was very useful for my work. She also works to make the herbs that are works of art in the bottles. She was very useful to me”. 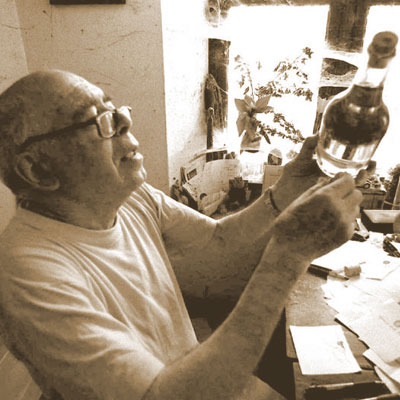 But it is with Romano that fame is gained by his bottles of Grappa, for the labels written by hand and then enriched with poetic phrases or naive drawings, those little masterpieces we now call “WILD ART”.
“… The first handwritten labels were created in 1962/63 when our friend Giorgio Adriano from Neive, who had a wine-house in Sanremo and bought grappa from us, said: “for me make labels torn from a piece of paper, then write by hand this and this… … not written by me but by an older lady, Mrs Sabina, and it was dedicated to a barrel that we called “Black forgotten Grappa”, it was very, very dark for the many years it had been in the barrel. Then this lady, after writing the first 50-100 labels, got tired and so I had to write them myself”.